Goth For One Day!

I thought it would be a good idea to start this blog by reviewing some of my very first looks. I didn't take many pictures or notes of my everyday outfits during my school years, so many of them just got lost in the way. But some others didn't... 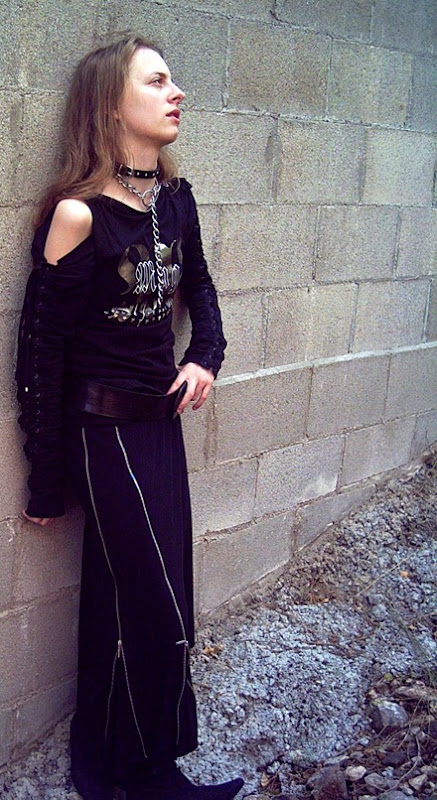 This one is actually the first aggressive look I ever created. These pics were taken in 2005 but I came up with the original outfit back in 2003.

I don't even know how it happened. Mango just had this fancy punk winter(?) collection (I always shop in outlets, so it wasn't the latest season when I got my hands over it) and I really loved these three pieces: the "Punk for one Day" T-shirt with silver print, studs and a zipper on top, the asymmetric skirt that also had matching zippers on the side and this really curious long-sleeved T-shirt with laced-up sleeves (I call it "Scissorhands" because it reminds me of the clasps on Edward's suit :P).

It's curious that this particular collection caught my attention that much, because I wasn't even into punk or heavy metal at that time, but all of a sudden I felt the need to look dark - really dark.

I remember I was choosing what to wear on the first day of term (it was September in Spain - way too hot to be wearing THAT! LOL). I had bought these clothes just a few days earlier and I was dying to put them on - even if it was still summer. I really wanted to make a statement. I wanted to look as menacing as I could.

I didn't want to choose between these two T-shirts, so I decided to put them both on at once - I think that's how I came up with the idea of layering them. The boots were also a relatively recent purchase (I'd had them for a year or so) and I liked the slightly medieval touch they added to my just discovered goth-self. But I still didn't have enough. For the first time in my life, I felt the need to add more and more and more to my outfit. I rummaged through all the drawers at home until I found that huge vintage leather belt. It was too big for me, but I didn't care. I liked the idea of it hanging lopsided on my hip. It was all so punk!

I can't remember if I already had the chains and the choker at that time or if I added those later, but even without them I bet the result was more than convincing.

Unfortunately, when I woke up the next day the wheather was even hotter than I had expected, so I had to give up on my dream of making a shocking entrance and ended up wearing a lighter summer-adapted version of my outfit.

You can't always win, and being a full-time goth in Spain is not the easiest job...

All my admiration goes to them ;)