I have a very curious thing with the subject of today’s post: I love suits and I hate suits.

OK, I should explain myself properly.

There’s nothing in the world I find less appealing than a regular guy wearing a regular suit (a.k.a. what we get sick of seeing at the Oscars ever since the 1930s). It’s probably because it represents the acceptance of the values and social etiquette of the establishment, but I just can’t stand it!

However, I also believe that there’s nothing in the world that dignifies a person’s look more than a suit does – which is probably the reason why masculine fashion has been restricting men from wearing any other type of clothing at formal occasions for the last 200 years.

The answer is: of course you can!

All you have to do is break the rules and be creative! 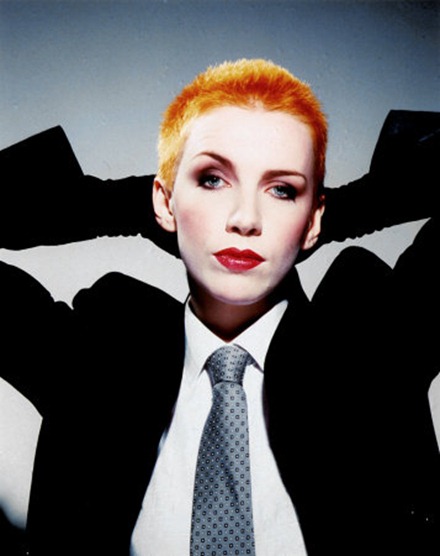 Play with the colours!

We all know suits usually come in greyscale, ranging from the ultra-formal black you wear at funerals (or the Oscars) to the bluish light grey you use at work – white and beige are only acceptable in the hottest climates. Obviously, the objective of a good classical suit is to make you look as uninteresting as possible, so, why don’t you give it a twist and use it to make yourself visible instead? Mother Nature gave us the colours for a reason… or are men supposed to be colorblind?

Come on! Be original and catch the rainbow (just like the Rainbow song said LOL). The brighter, the better!

And, of course, electric blue is always a great place to start ;)

The suit pictured here is a piece from Banal Chic Bizarre 2012 Spring-Summer Menswear collection (don’t worry – you don’t need to wear a black hood over your face to look cooler LOL).

Red and blue taken to the next level! 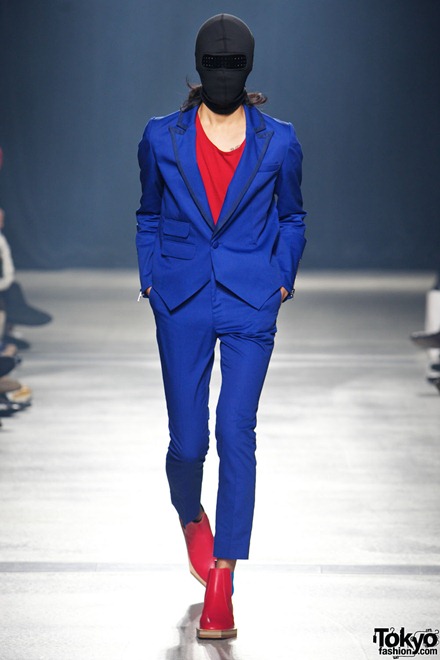 Play with the patterns!

Run away from the subtle stripes and challenge the world with some unexpected patterns instead!

My personal favourites in this category are these suits from Yoshio Kubo 2012 Spring-Summer collection. The first one has this funny what’s-wrong-with-my-screen appeal you could only expect to find in Japanese fashion, and the second one is just killer! 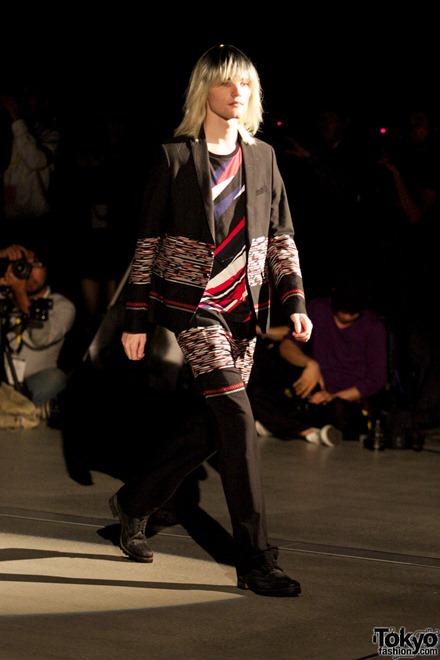 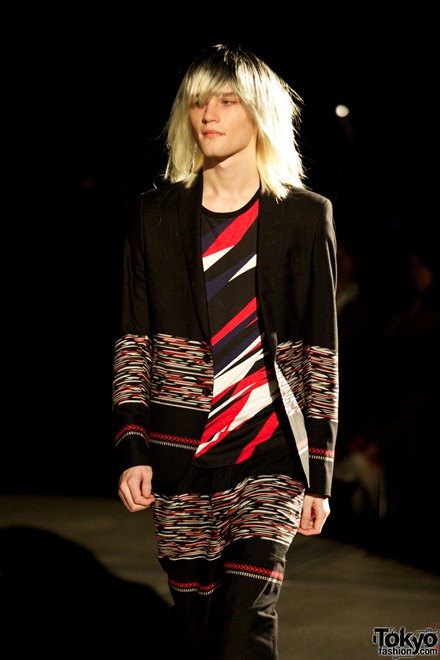 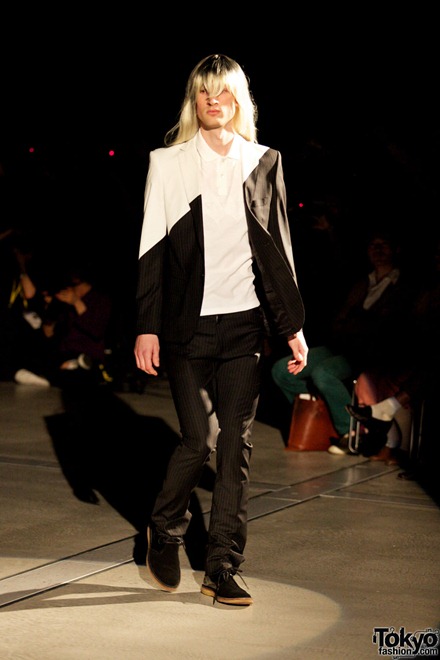 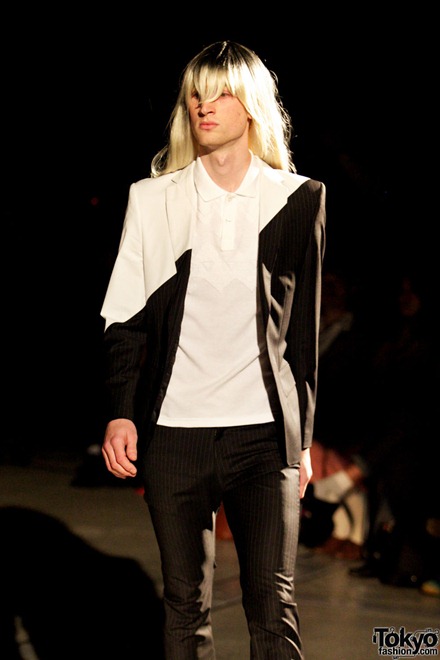 Everything is allowed... as long as it’s not boring!

Even stripes can have a chance if you take their visual power to the maximum. Just like the more-than-legendary striped suit Dave Gahan wore in music video for I Feel You. 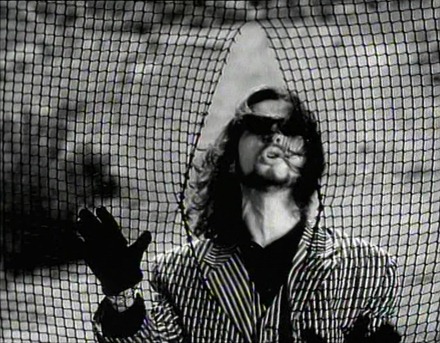 I apologize for repeating the word “killer” so many times in a row, but THAT’s the king of KILLER looks!

Play with the structures!

Take the challenge to another level and defy the conventional structure… just like Bill did with this awesome Jean Paul Gaultier blazer. 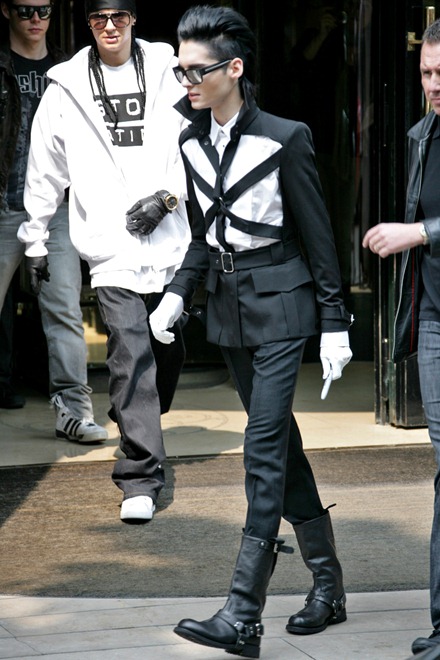 Of course, talking about turning boring suits into objects of beauty and adoration, I couldn’t skip over Bill Kaulitz – one of the huge experts in the subject, along with Master Marilyn Manson.

This outfit still knocks me out every time I see it, not just because of its unbelievable coolness, but also because of the awesome reinterpretation Bill made of the original piece. The fact itself that this blazer was originally created as womenswear (Rihanna wore it a few months before he did in quite a different context, much more similar to the version that was displayed in the catwalk) says something about how great his vision was when he decided to take it and transform it into this ultra-edgy sort of SS uniform.

I don’t know what if that’s what he had in mind when he put up this outfit, but, whatever it was, he looks awesome as f**k (I’m quoting Green Day here LOL) in it. 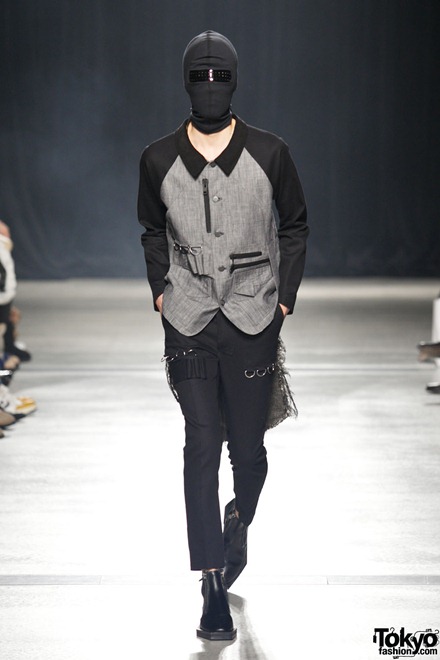 This suit from Banal Chic Bizarre (you might have already recognized the collection by the black hood) is another wonderful example of challenging structures. It even has a bunch of subtle punk details placed there specifically for my enjoyment (LOL)!

Play with the materials!

Don’t think I need to explain this one (LOL).

Pictured below are Marilyn Manson and Dita Von Teese dressed fully in latex: the proof that wearing fancy suits is perfectly compatible with a socially acceptable heterosexual life (LOL). 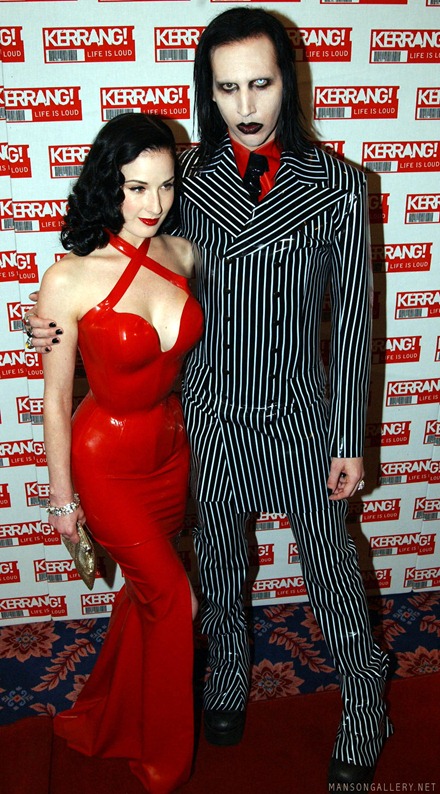 I won’t be the one who tells you that a latex suit is the most practical solution for everyday life, but, just like Dita herself would say: “It’s not as comfortable as going naked, but there’s something about it we love”.

Remember the cover of the KISS album? 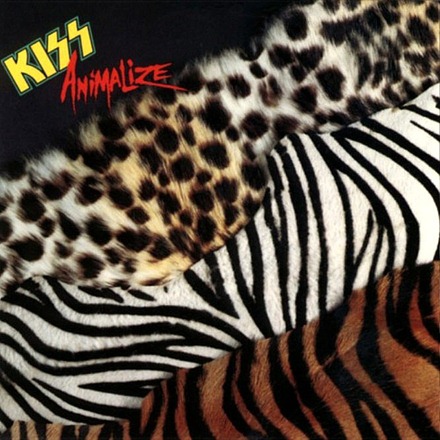 There you’ve got it! I’m not usually a big fan of animal prints, but they are certainly a great way of turning a suit into a big statement. Of course, this is only suitable for those who are not afraid of looking a bit gangster.

The first two looks featured here come from HEADL_INER 2012 Spring-Summer collection. The short pants and the heavy boots make them look quite childish (okay, the Indian headdress might help too LOL), and that’s something I find particularly lovely (maybe it’s time to check back on my London Calling post :P). 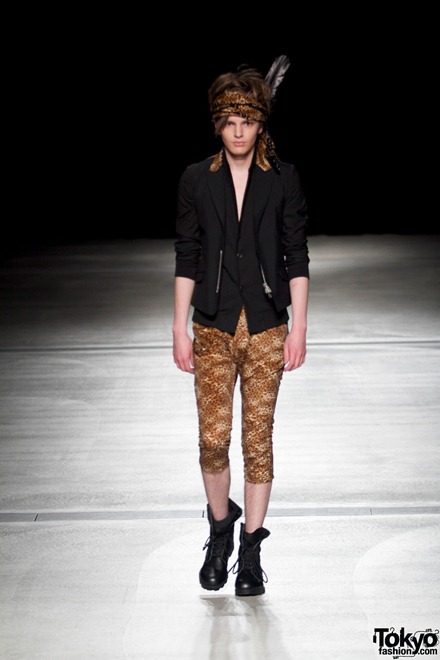 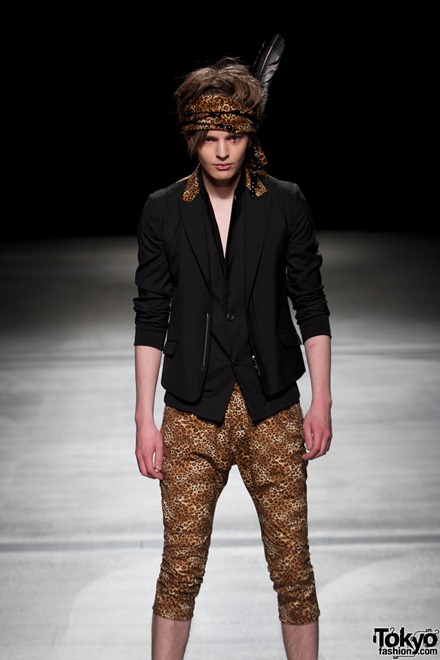 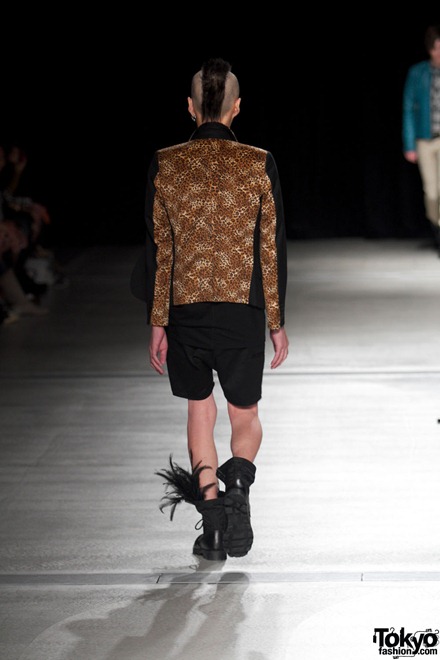 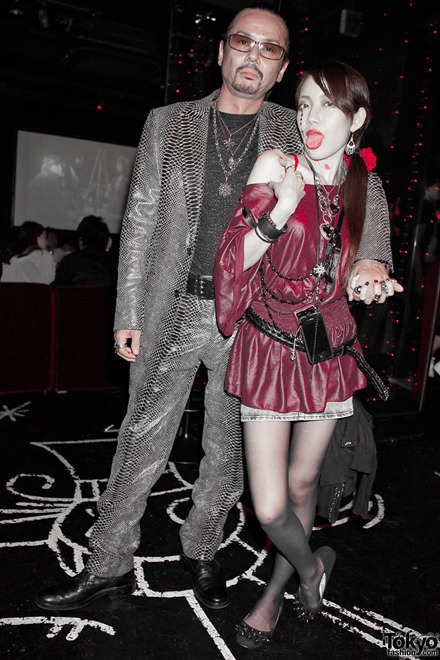 What did I just say about looking a bit gangster? (LOL) 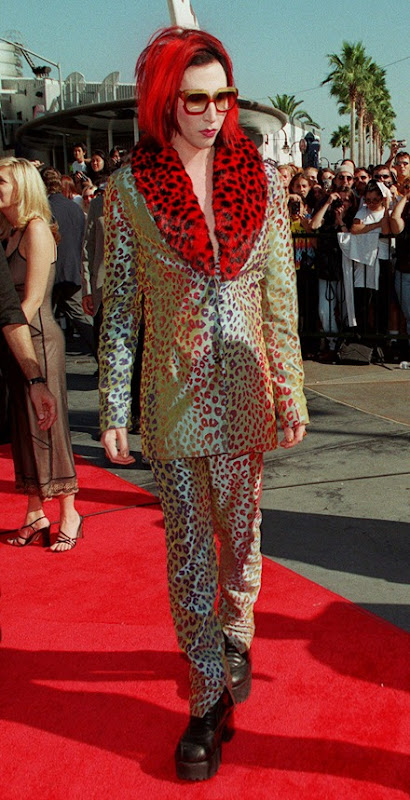 This one here is the mythical Omega outfit (well, that’s what I call it LOL) Marilyn Manson wore at the VMAs in 1998 – I’ll spare you the vision of virtually naked Rose McGowan because I guess none of us wants to go through that again (LOL).

Now that suit IS a dream. If I wasn’t the size of one of Marilyn’s legs, I swear I’d sneak into his house and steal it… well, that’s if he still keeps it.

Unfortunately, I think it doesn’t look that great when you don’t have bright red hair to match it...

Who said boys don’t glitter? Of course they do, and you should see just how! 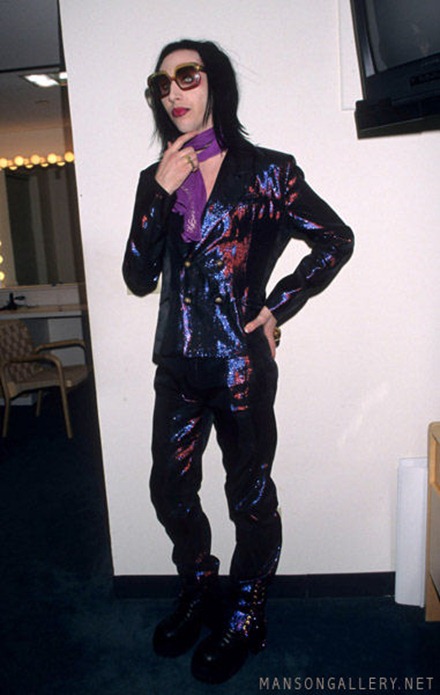 No, those are not thigh-high boots (it took me months to figure that out LOL): it’s just a clever visual trick played by Rad Hourani. In fact, it’s a normal (well, “normal”) pair of trousers with matching high-heeled booties, but the overall effect is awesome. Rad Hourani is only releasing unisex collections (thank god SOMEBODY does that), so you can all feel welcome to join this trend… for a reasonable price (LOL).

Are those garter belts peeking from underneath Marilyn’s beautiful wine-coloured suit? Did he borrow them from his (ex)wife? (LOL) I love them! And I adore the huge false lashes he used to wear in that period, too. 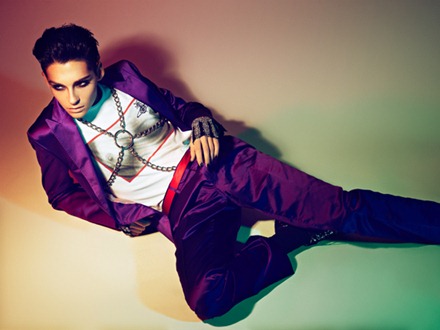 Now that's what I call BEAUTIFUL.

Make your own rules!

Fancy suits are there for anyone who wants to use them, and this goes for everyone: boys, girls… who cares?! Never let anybody or anything tell you what you can and what you can’t wear! 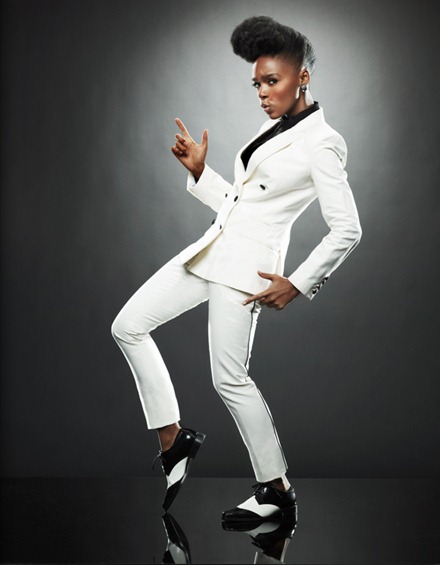 Be brave and make your own rules… or otherwise the rules will make you. 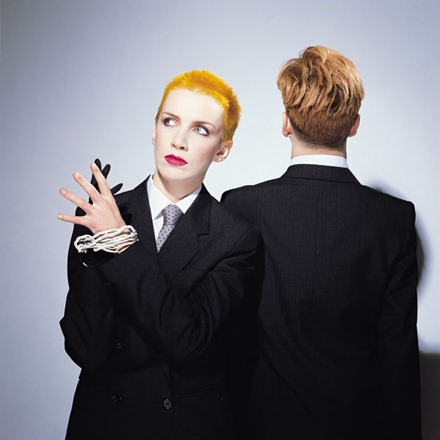